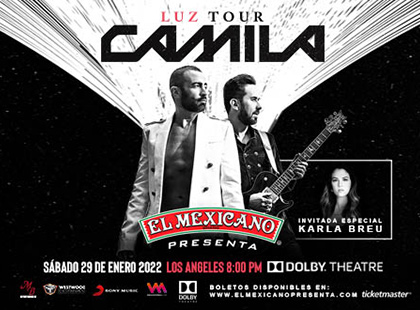 All ticketholders age 2 and over must show proof of full vaccination or a negative COVID-19 test for entry.

Photo identification is required for all guests age 18 and over.

Masks must be worn by all ticketholders, regardless of vaccination status.

CAMILA, the group that has set a trend in the Spanish speaking world for more than fifteen years of an impressive career, is now ready to begin their tour “LUZ TOUR” across the United States.

After the successful “4 LatiDos” tour (2018-2020) in which they shared the stage with Sin Bandera. They accomplished more than 50 Shows across the American Continent, half of them in the United
States. At the beginning of 2020, Camila kicked off their “HACIA ADENTRO” tour, visiting various cities in the United States. A few months after they celebrated their 15th anniversary releasing
singles such as “Luz” and “Bandera Blanca”.

CAMILA is now back with their “LUZ TOUR”, which will start in the month of August.

About Camila:
Founded by the laureate composer, interpreter, and producer Mario Domm (Torreón, Coahuila), Camila emerged officially in the year 2005 when he signed the first record deal with Sony Music, alongside his colleagues and friends the guitarist Pablo Hurtado (San Luis Potosí) and the singer Samo (Veracruz). Albums recorded with them were “Todo Cambio” (2006) and “Dejarte de Amar” (2010), both immensely successful hits that turned the group into one of the indispensable references in the music for Latin America.

Since then Camila has reached 15 times the top of the Mexican hit lists amongst others crossing their borders. Singles such as “Abrázame”, “Coleccionista de canciones”, “Todo cambió”, “Mientes”, “Aléjate de mí”, “Bésame”, “Decidiste Dejarme”, “Perdón” y “Te Confieso” and many other, have granted them extraordinary numbers in the music industry of our days.

To this are added the uncountable experiences on stages such as Madison Square Garden in New York, the Nokia Theater in Los Angeles, the Colosseum of Puerto Rico, the Barquisimeto of Venezuela ( in which 100,000 people attended) the Gran Rex in Argentina and Viña del Mar in Chile, to mention a few outside of Mexico, country in which they have performed in the greatest stages, including eight times in the Auditorio Nacional, four times in the Palacio de los Deportes and the Foro Sol. A hard to beat record. In addition Camila has collaborated with international stars such as Ricky Martin, Marco Antonio Solis, Colbie Caillat, Kenny G, Alejandro Sanz, Alejandra Guzmán, Reyli, Chambao, Aleks Syntek, Wanessa Camargo, amongst others,

In 2014 Camila released their third studio album, “Elypse”,changing their status from trio to duo. Today Mario Domm and Pablo Hurtado who beat this music project with which people have delivered with such fervor, and follow with great loyalty.

Camila, with their “ ELYPSE” tour, became one of the Latin artists that have toured the United States with more than 70 shows.

In 2019 Camila released their fourth studio album “ Hacia Adentro” and accomplish with great success “ 4 LatiDos Tour” along side Sin Bandera (more than 120 shows) .

Along their fruitful career, Camila has accumulated multiple awards and recognitions:

COVID-19 is a highly contagious disease that can lead to severe illness and death. An inherent risk of exposure to COVID-19 exists in any place where people gather, including theaters. The Dolby Theatre (the “Theater”), in compliance with guidelines issued by federal, state, and local governments, has put in place preventative measures to reduce the spread of COVID-19 in the Theater. Notwithstanding these preventative measures, visiting the Theater could increase your risk of contracting COVID-19 including from patrons, guests and other individuals in the Theater.

By purchasing this ticket and/or accessing the theater, you acknowledge the highly contagious nature of COVID-19 and VOLUNTARILY ASSUME THE RISK THAT YOU MAY BE EXPOSED TO OR INFECTED BY COVID-19 BY ENTERING THE THEATER AND THAT SUCH EXPOSURE OR INFECTION MAY RESULT IN PERSONAL INJURY, ILLNESS, PERMANENT DISABILITY, AND/OR DEATH.

YOU HEREBY RELEASE, COVENANT NOT TO SUE, DISCHARGE, AND HOLD HARMLESS THE THEATRE, ITS EMPLOYEES, AGENTS, AND REPRESENTATIVES, OF AND FROM ANY COVID-19 RELATED INJURY INCLUDING, BUT NOT LIMITED TO, PERSONAL INJURY, ILLNESS, DISABILITY, AND DEATH AND ANY ASSOCIATED DAMAGE, LOSS, CLAIM, LIABILITY, OR EXPENSE, OF ANY KIND (“CLAIMS”). YOU UNDERSTAND AND AGREE THAT THIS RELEASE INCLUDES ANY CLAIMS BASED ON THE NEGLIGENT ACTS OR OMISSIONS OF THE THEATER, ITS EMPLOYEES, AGENTS, AND REPRESENTATIVES, WHETHER A COVID-19 INJURY OCCURS BEFORE, DURING, OR AFTER YOUR VISIT TO THE THEATER.