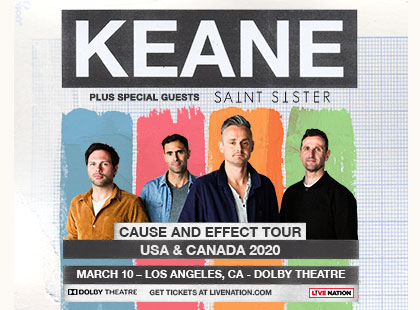 In advance of Keane’s upcoming album Cause and Effect, the band have announced their North American tour!  Kicking off March 5th in Vancouver at The Commodore Ballroom, Keane will tour the U.S. and Canada with 16 shows throughout March 2020.  Keane spent the summer blowing away festival crowds across Europe and instantly sold out underplays in the U.S. including New York’s Bowery Ballroom and The Roxy in LA.

CAUSE AND EFFECT is Keane’s follow-up to Strangeland of 2012, which included the singles "Disconnected" and "Silenced by the Night.”  The birth of the new album came as something of a surprise even to the band.  During their hiatus, singer Tom Chaplin had released two successful solo albums but missed his old sparring partner Tim Rice-Oxley.  “I found myself wondering how I had come to let this very enigmatic and important relationship in my life drift,” Tom said.

Meanwhile Tim, going through his own personal struggles, found he had written an album’s worth of incredibly personal songs fueled by humour as well as pain. When Tom, bassist Jesse Quin and drummer Richard Hughes heard the songs, they were immediately drawn to them both sonically and lyrically.  “Hopes and Fears was a break-up album too,” Tim said, referring to Keane’s acclaimed 2004 debut, with “Somewhere Only We Know,” a massive hit, covered by Lily Allen, Kacey Musgraves, David Archuleta, and others. “But it was about a break-up when I was 19. It’s a bit different when you’re older and you’ve got kids – your whole little world shifts on its axis.”

“The Way I Feel,” like the other ten tracks on CAUSE AND EFFECT, is an emotional and remarkable slice of life, and reminiscent of the very best of Keane.  It’s an exciting period for one of the UK’s great bands and a very welcome return.  As Tim has said, “We’ve got a lot of great music in us.”  CAUSE AND EFFECT is just that.

To set an email reminder for a show/event, please fill out the simple form below and click the SET REMINDER button when complete!